The tree may reach up to 20 meters height. The large and opposite leaves are petiolated and palmately lobed.

The trunk is brown and smooth but gradually becomes greyish-black, breaking up the bark. The flowers are erect and hermaphrodite, mainly white with a small pink spot. The seeds, called conkers or chestnuts, are contained by one or two in a greenish and spiky capsule.

The chestnut is attracted to sunlight, which so called heliophilia. It is mostly planted for ornamentation. Sometimes, it is subspontaneously found in maple and linden forests.

The horse chestnut pollen dispersal is mainly mediated by insects. This is why low pollen amounts are detected in the air. Occasional allergy to horse chestnut pollen is well-known, mainly among individuals living either in avenues where these trees are planted or near trees growing in open settings. 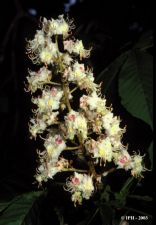 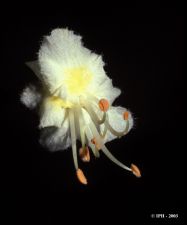